Until recently, ALS patients have only been able to communicate by using expensive screens that can recognise blinking. But the people at EyeControl took it upon themselves to develop a cheaper, more sophisticated, more practical alternative; and one informed by first-hand experience of ALS.

Their co-founder, Shay Rishoni, is a former colonel, pilot and Iron Man, as well as an ALS patient and fundraiser. He has worked exhaustively to improve the lives of ALS patients, and with the EyeControl team has developed an affordable mobile device to aid communication for those with ALS; one which not only registers blinking, but tracks a whole host of far more complex eye movements.

Last year their innovative product took them all the way through to the Chivas Venture Final, where alongside WeFarm, Conceptos Plásticos, Coolar, and Wakami they pitched their business in front of a live audience. With just five minutes to impress the judging panel, made up of Sonal Shah, director of the Beeck Centre for Social Impact and Innovation, actress and activist Eva Longoria, Joe Huff of Lstn and Alexandre Ricard, CEO of Pernod Ricard, EyeControl deservedly secured $100,000 funding.

Although the product is still very much being honed and developed, participating in last year’s competition has certainly brought them closer to bringing their innovative and intuitive device to locked-in patients.

A year and a half after they applied to The Chivas Venture alongside some 2,500 others, EyeControl CEO, Or Retzkin, recalls his personal recollections of the competition and what it has done for his fledgling business.

What was your abiding memory of The Chivas Venture?
It is one of the strongest and most memorable experiences I’ve ever had. Starting with the Accelerator Week, in Oxford - which was a great adventure - meeting all of the other entrepreneurs, seeing so many different companies, organisations, cultures and skills in one place. After a few days we all became very close and it was a kind of like an entrepreneurial boot camp! You head into the hallowed cloisters of Oxford and get given a kit for the whole week. You don’t really know what to expect. It’s a very tight and intense week; there are pitching workshops, you’re baking cakes together, going out together. You only have an experience like that a few times in your life. If I could compare it to anything it would be…no....actually I don’t want to compare it to other stuff.
This is what makes the Chivas Venture so unique. There are some other competitions where you can apply for grants, but this whole system, it’s almost a year from the day you’re participating in your local competition. Over a year until you go to the final event. And the year is full of so many events related to competition. It’s certainly one of the main things that happened for us in 2016.

Were there any finalists you’ve stayed in touch with or explored the idea of partnering with commercially in the future?
Yeah, of course. We still have our WhatsApp group from the Chivas Venture, and we text each other on our birthdays or about stuff that is happening. At times we’ve asked questions here and there about specific countries, because EyeControl is currently focused in Israel, but our goal is to become a global company. The people we met during the Chivas Venture are the leading entrepreneurs in each of their countries, so of course we can help each other.

Did you learn anything from the other finalists during the competition?
On the second day of the finals I went for a run in New York City with Charles Blaschke, co-founder of Taka Solutions [one of the 27 finalists in 2016] and we spoke about the mentality of entrepreneurs. Sometimes you forget about enjoying the moment. As an entrepreneur, you’re always looking to the next milestone, the next mission; you forget to enjoy the journey! So we talked about how you have to be proud of what you’ve already achieved. Embrace the madness and enjoy the ride.

There is a great picture of you behind the scenes, just before you walked out on stage to deliver your final pitch. Can you describe what that moment felt like?
It wasn’t just a pitch. It wasn’t just me on stage. It was about giving the device the best chance of success, because it could change a lot of people’s lives. Usually with the crowds and the judges you get nervous, it was definitely intimidating! But I remember during the Final Pitch I was very focused. You really want to remember that moment, but it goes by so fast once you’re on stage. Those five minutes, feel like five seconds. 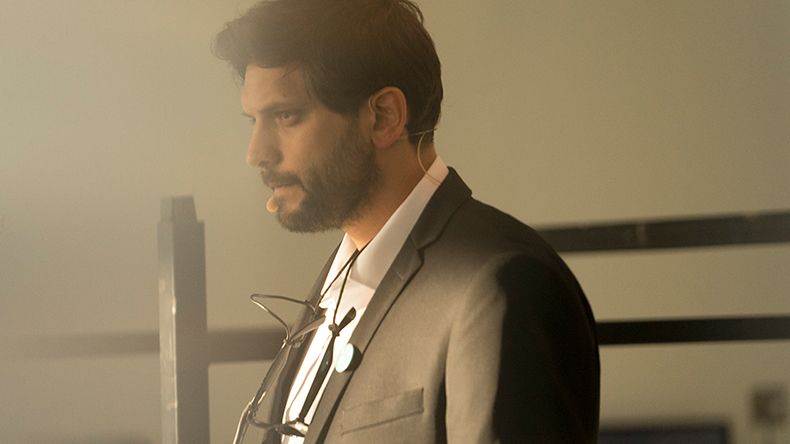 What advice would you give to this year’s finalists?
If you’ve been chosen then you’re already a winner. You get to have an experience that so few people get to go through. If you think about that…even the most successful startups and entrepreneurs don’t usually have the privilege of having this kind of adventure.
It’s very dream-like when you establish a company, you go through so many situations. But The Chivas Venture is something I will never forget. I would tell this year’s finalists to make sure they enjoy it.

How has EyeControl developed as a result of your experience in The Chivas Venture?
Since coming back we did our clinical trial at a hospital in Israel. We’re 90% finished now. Most of the funding we received went into product design, but it also helped us complete our clinical trials sooner and - more importantly - to an even higher standard.

Did the media coverage from The Chivas Venture provide any business or networking opportunities?
Yes, of course, you get a lot of calls. You get the media writing about you. We got emails from patients and their families asking about the device, and people asking if there are funding options. The Chivas Venture is great exposure for a company - and not only if you win!